In the second round of the Hunter Exam, the candidates are faced with an even more challenging problem, requiring both agility and mathematical skills.

After entering the Examination Hall for the second round, candidates are faced with a huge vertical grid containing empty spaces, obstacles and conveyor belts. The grid is composed of $K$ identical parts, each of size $(R+1) \times C$, stacking vertically on top of each other. In order to pass the exam, each candidate must drop exactly one ball into this grid and get the maximum possible score. 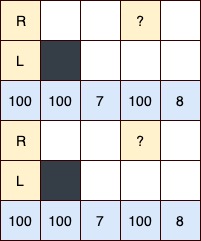 Each cell in the grid can be one of the following:

As the time for the exam is limited, the exam will also end when the ball goes through $10^{20}$ cells.

Your final score in this exam is the sum of score you get when the exam ends. You don’t have to make the ball fall to the bottom. To pass the exam, you must find a way to set the conveyor belts and set the initial position of the ball to maximize the final score. Can you do it?

In the next $R$ line, the $i$-th line contains exactly $C$ characters. Each character can be one of the following:

Explanation for the first example 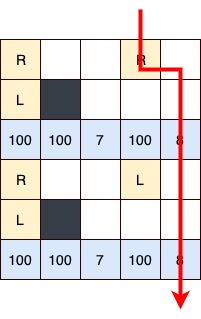